Who are Police in Detroit Targeting in the Gun Grab, and How?

Making a virtual appearance in Wayne County’s 36th District Court bright and early on Friday, the man on the screen in a dapper grey suit and striped tie, salt and pepper hair and a gentle demeanor, hardly cast the figure of a gun-toting outlaw. Sitting upright and attentive from his homey living room, Otis Goree took his turn in front of Judge Kenneth King for a preliminary hearing stemming from his February arrest for carrying a concealed weapon without a permit.

Otis’ case was one many like it being heard that morning in courtroom 438. Though access to the public was limited (several were abandoned in the Zoom waiting room after attempting to log on using the public link), our from Majyck Radio was able to watch over an hour of the proceedings, during which dozens of individuals came before the court for concealed carry charges.

Since the onset of the coronavirus pandemic, gun sales across the country have been on the rise, and gun violence has risen alarmingly in many major metropolitan areas.  In response, Detroit police are cracking down – focusing their efforts on identifying, stopping and questioning individuals they believe to be carrying weapons and making arrests when those individuals are unable to furnish a concealed carry permit –  which, unlike the guns themselves, have become difficult to obtain. Getting a license requires a gun owner to successfully complete an approved training course – in person. While the pandemic rages on, many providers of the training have limited or entirely suspended their offerings due to public health concerns and social distancing requirements.  Amidst an uptick in violence within their neighborhoods, citizens like Otis feel at risk, but unable to legally protect themselves. 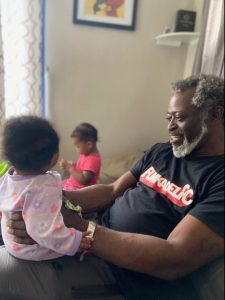 Otis, 59, is a lifelong resident of Detroit. A hardworking family man and grandfather of 2, he enjoys working with his hands.  Since heart attacks in 2018 forced him into early retirement from his job in building maintenance, Otis spends most of his time gardening, woodworking, and relaxing at home.

Prior to 2020, Otis had never owned or fired a gun in his life, and didn’t feel like his lifestyle necessitated a firearm. That changed with the onset of Covid-19 in early 2020, and the massive social unrest, racially motivated and politically sanctioned violence, and an increasing sense of fear and desperation among many of his neighbors that led to increased violent crime in his community. Otis no longer felt safe, and for the first time looked to equipping himself with a firearm for personal protection.

Otis is not alone. It is estimated that first time gun owners account for over 40% of gun sales in the country since early 2020 – more than double the average in previous years.

Otis purchased his small pistol from an authorized dealer and made sure to have it registered immediately. He didn’t know when he made his purchase that he would not be able to take a class locally to obtain his Concealed Carry Permit – information the seller didn’t share with him until after Otis had purchased and registered the weapon.  So, while the gun would afford him some peace of mind at home, it would have to stay there. And it did, until one snowy day in February.

Normally, Otis relies on friends and family to drive him when he has errands to run. On February 17th, however, there was no one available to take him. Instead, he would have to walk to the stop on 7 Mile and take the bus. “I needed my vegetables”, Otis says, so he set out with his reusable grocery bags, his walking cane and, for the first time, his pistol. “Things had gotten pretty bad,” he explained, referring to violence in his neighborhood off 7 mile in Detroit.  Indeed, homicides in Detroit rose 19% in 2020, and non-fatal shootings were up 53%. So when he left on what would have otherwise been a routine trip to the market, he tucked the gun securely into the waistband of his pants, underneath his heavy winter coat. Otis explains that he didn’t make the decision lightly, but that he felt the need to bring a weapon with him because he feared for his safety in the neighborhood and at the bus stops.

The shopping itself was uneventful, but while he waited, loaded down with bags of groceries, at the stop for the bus that would take him back home, suddenly two officers pulled up in a black stealth police SUV, got out, approached him (and only him) directly and immediately asked him if he had a weapon. Otis replied honestly that he did, and when asked if he had a CCW permit, told the officers he did not. Otis was relieved when after a few minutes, the officers then told him to go ahead and get on his bus and go home.  Unfortunately by the time he gathered his bags from the sidewalk, the bus had already moved on. Not wanting to stick around, he decided to walk to the next stop and catch his ride from there. He made it less than a block down the road before another stealth police vehicle pulled aside him and two more officers questioned him – exactly as they had at the bus stop moments before. Otis replied as he had at the bus stop, and once again the officers told him to be on his way and pulled off.

Increasingly nervous and just wanting to get home, Otis walked on for another half a block or so before a third police vehicle pulled in front of him at the next intersection and blocked his path. He was bewildered. The exchange started out much the same – Otis shared when asked that he had a weapon, told them where it was, and explained he did not have a permit. This time, he was arrested.

Sitting in the back of the police car that day, Otis recalls that his arresting officers claimed to not know about his having been stopped previously, which surprised him. Surely it was more than coincidence that led to his being stopped by three separate police vehicles on such a short journey. And how did they all seem to know he had a gun? Were the police using some kind of detector tools on patrol? He asked his arresting officers, who laughed. “We’re just really good at our jobs” one said. The coy denial didn’t convince Otis.  What would have otherwise prompted them to approach a greying older gentleman with a cane and bags of groceries at a bus stop? If they didn’t already know he had a gun, why was that the first question they asked at each stop?

Others agree with Otis’ suspicions – and the idea isn’t far fetched. For years, the department of defense and policing agencies in the united states have been developing and piloting technologies that can detect weapons from as many as 80 feet away, raising fourth amendment concerns about whether or not scanning a person’s body of personal effects absent a warrant constitutes an illegal search. Though public information on the use of these technologies in Detroit is difficult to find, we know they have been implemented elsewhere in recent years, including in New York, where after public outcry the city voted to require the police department to publicly disclose their use of surveillance technology – something they had been actively trying to keep quiet. Meanwhile, the Detroit Police Department has increased its surveillance on citizens in recent years, with the installation of cameras on city streets and audio gunshot detector software that uses cell phone audio to pick up gunfire and triangulate its location. And given the department’s partnership with federal agencies over the summer with Operation Legend – and the millions of dollars that came attached – it’s easy to imagine they may have gained access to even more tools like these.

Farooq Azizuddin says that even if Detroit Police haven’t acquired new technology, for over fifteen years they have employed a scanning device that can be aimed at individuals from a distance to pick up “unusual amounts’ ‘ of metals on a person. Azizuddin, a security expert and former Black Panther, says these devices were developed during the Iraq war to keep troops safe from armed insurgents overseas and eventually, as commonly happens with military tools, they became available to law enforcement agencies stateside.

When Otis was booked at the county jail after his arrest in February, he shared a cell with several others, at least 11, who were also awaiting arraignment on weapons possession charges. All had similar stories about their arrests. Over the course of his 3 day stay, the trend continued; those that bonded out were quickly replaced with others newly arrested under similar circumstances. The numbers aren’t surprising; DPD’s Chief James Craig calls his department’s efforts to crack down on guns “aggressive”.

There is no question that gun violence is a huge problem in our communities, one that has grown considerably in the last year. But rather than address the root causes of crime and violence in a community historically marginalized and poverty stricken, currently experiencing the worst effects of the current pandemic, the city is focusing instead on increasing surveillance of its citizens and casting a wide net to grab as many guns as they can. But who is getting caught up in it? Chief Craig has been a longtime advocate for an armed citizenry, stating his belief that “good guys”, law abiding citizens with guns create safer communities, reduce crime, and even deter terrorism. Thanks to the pandemic’s limiting effect on the registration and licensing process for firearms in addition to an increased need for personal safety, people like Otis, who has no prior criminal history, are finding themselves targeted – seemingly by virtue of being Black. The stealth units appearing in Black neighborhoods conducting these sweeps seem to be absent from more affluent white areas of the city. Maybe that’s where Craig believes the “good guys” are?

Now Otis, who has been looking forward to finally being able to spend time with his children and grandchildren once the threat of Covid-19 subsides, is instead staring directly at a felony charge of carrying a concealed weapon without a permit – punishable by up to five years in prison.  The process is slow, but Otis has a lot of questions about his case, and he intends to use this time to get answers. His preliminary hearing today was adjourned until June 30th on account of his attorney having only this morning received the discovery packet – containing documents and evidence necessary to develop his defense.  In addition to working with a public defender, Otis has also partnered with Emergent Justice’s Participatory Defense Hub – a cooperative of individuals who come together regularly to review cases, strategize, and dismantle roadblocks to achieving just outcomes. The team will be working diligently in the coming months to support him and his attorney on this case in the coming months.

In the meantime, while the specter of “justice” hangs over his head, Otis plans to go about his business more or less as usual.  He’ll ready his gardens for spring, do a little woodworking, practice the harmonica, and maybe even get around to restoring the old Corvette in his garage. And while his own fate is uncertain, he wants more than anything for the community to be aware of the tools and tactics of the police that patrol his city. “Everybody is safer when everybody else knows what’s going on”.

Majyck Radio reached out to the Detroit Police Department to inquire about their use of surveillance technology, and hopes to learn more about the circumstances that led to Mr. Goree’s arrest. We will continue to follow his case. More information about Participatory Defense can be found online at Emergent Justice’s Website: emergentjustice.org.