Yolonda is a natural and soulful singer, songwriter, poet and model. Her sound is the perfect mix of rhythm & blues, jazz, soul and gospel.

KALAMAZOO, MI — Part of  an artistry collective, Truth Tone Records, record a based in Kalamazoo, and as a performing solo artist,  Lavender will debut her second studio album,  Generes In Me. 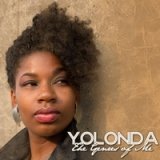 Yolonda will perform on Feb, 15 at Shakespeares Lower Level. Tickets are on sale now. Presale, $7 day of show $10.

Headlining several natural hair, health and beauty exops including the World Natural Hair Health and Beauty Show, Naturally Me Media’s Fro Fashion Week and being crowned runner up in the World’s Next Top Natural Hair Model Contest are a few of Yolonda’s major accomplishments.

Yolonda has opened for many R&B acts that have come through Kalamazoo and SW Michigan including The Spinners, Vaughn Anthony , Keith Murray, Sunshine Anderson and Elzhi, Abyss, Georgia Me, Men at Large.

Last summer she performed at Soul of the City Festival in Grand Rapids where  classic ‘70s and ‘80s funk-R&B-soul bands such as Lakeside (“Fantastic Voyage”) and Midnight Star (“Freak-A-Zoid”) headlined.

Yolonda also takes pride in using her talents to better her community and has done so by being apart of African American history celebrations, war veteran fundraisers and community outreach concerts.

Enjoy a live band performance and a after party following the show with DJ  Conscious.

For more information about the Valentine concert and album release party call 269-779-0480.

Check out her latest single  from the album, “Kalamazoo” written by DC from Truth Tone Records and production provide by Achickwitbeatz.

Truth Tone Records r&b songstress, Yolanda Lavender is set to perform in the entertainment district of Kalamazoo, MI. Make sure to come early as the show will sell out early. Yolanda will open for R&B groups such as Next, Lakeside, Midnight Star, Men At Large, One Way Featuring Al Hudson, Vic Wobble at the Soul In The City Music Festival in Grand Rapids Labor Day Weekend.

Also including with a weekend of festivities, nonprofit information booths, food as well as cultural exhibits. Tickets are available through Startickets outlets.